I have been active as a Butterfly Monitor since April 2012. In the Summers walking my route in Liniepark in Breda, I noticed that even though the park had a bad reputation and was covered with litter, a lot of people enjoyed it and even more important many animals and insects were living there. To make it a nicer place for animals and people, I came up with an after-school program for the schools next to the park, Rudolf Steiner and Okba Ibnoe Nafi. I titled the project “Daar lusten de honden geen brood van”. An Dutch expression, but instead of using the meaning of the expression, I referred literally to the fact that even the dogs pooping in the park wouldn’t eat the piles of moldy bread. In this way giving my frustration of litter in the park a funny name.

Walking through the park with a parade of 20 kids from the Rudolf Steiner School in May and June of 2014 was funny and great. We were lucky to see the butterflies I told them about, but also other little insects and waterbirds. I told them about the inhabitants of the park, but also about how we could improve the park for them. We talked about litter, the mowing policy and that that scary looking larva become the pretty ladybug, smelled the minty watermint and tried to collect shiny,  dotted feathers without disturbing the ducks to much.

In September and October 2014 my project was used to make an entire after-school program about Nature & Environment at Okba Ibnoe Nafi. In the lessons they would talk about things like  recycling, what is your environment? And how would you like to improve it?
During the walks we would talk about the things we noticed, about litter and the animals, about being quiet and meanwhile spotting butterflies.
During the second walk I asked them to draw what they liked and disliked about the park. The first reaction was “We don’t want to draw ugly things!”, but I explained that in order to make people aware of ugly things, like empty bottle, cigarette butts,  moldy bread and dog poo, we need to confront them with it.
In the last lesson we made signs for the park, not your tradition prohibition signs, but a signs that explains what the kids from Okba Ibnoe Nafi find important.
The signs show a mix of butterflies, the fountain (important for the health of the water and therefor important for the inhabitants of the park), trees, trashcans with the text “throw your trash in the trashcan” and “Be quiet”.
These beautiful signs had to be proper unveiled in the park. So I send some press-releases, hoping the speeches the kids prepared, would be documented by one official press-person. To our surprise the unveiling was documented by 3 photographers and a cameraman and. The kids were nervous, but also very happy to become little celebrities.

The next day the local newspaper BN de Stem put the unveiling of the signs on their frontpage of City & Region (Stad & Streek) news and in the weekend it was frontpage on the door-to-door citynewspaper Het Stadsblad.
Happy news, fighting negativity with positivity! I’m a strong believer of that and every time I see the colorful signs in the park I know it is the right way. You need to confront people with the ugly things, but sometimes the same goal is achieved by showing the pretty things instead! 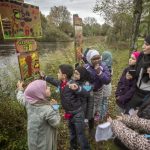 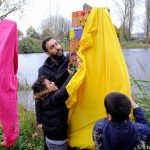 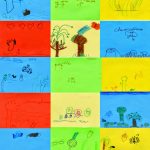