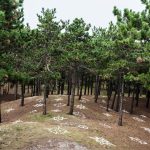 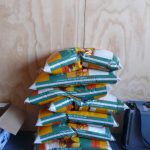 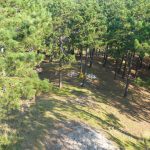 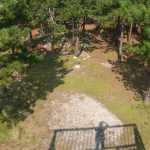 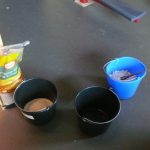 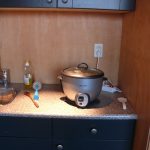 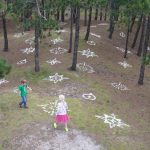 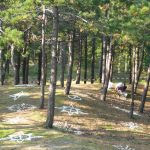 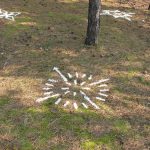 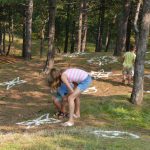 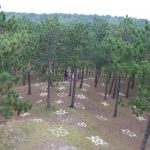 Technique: Pattern made of cooked rice with a stencil

In the beginning of May al artists who got selected for Into The Great Wide Open 2014 where invited to check out their locations, meet the forester Erik and get a small preview with Here Comes The Summer. It was pretty cold, and being home only two weeks after the residency in Cambridge it felt a bit strange being away again to another island. But I also felt so fortunate that this was and is my job!
The project idea I send in was to make a ricecarpet that would be best visible from a high lookout. The pattern for the carpet would be based on a local popular motif. During my visit to the island and afterwards I gathered a lot of information about Vlieland and the specific location for my carpet called ‘Sjouwersmanbol’ (something like “Porters-man-bulwark”). On this viewpoint is now an ex-NAVO range. From this high steel construction you get a great view over the island, the sea channel between Vlieland and Terschelling, the sandbank Richel and a lot of water. The natural viewpoint was used by cargo porters to spot the incoming ships through the sea channel. They then had enough time to run towards the harbor and secure the shipment.
Looking at old maps and so called “spekmatten”. “Spekmatten” are floor mats made by sailors. On board they kept the needle in the grease so it wouldn’t rust. I noticed one clear motif, a symbol used on every map and I also found it on a lot of other things on Vlieland: A Windrose.
I made a ricecarpet with the title ‘Alles Stroomt’ (Panta rhei / “Everything flows). The windroses all pointing north. I used 4 different motifs to make 35 windroses out of cooked rice. During the three days of  Into The Great Wide Open, 5 till 7 September 2014, the ricecarpet slowly disappeared while the birds eat from it.
Read more on:
– On the Into The Great Wide Open site my work was featured as ‘Oogst van de dag 1‘
– Previous works I made inspired by windroses can be found in the blogpost “Was ist ist, was nicht ist ist möglich” on De reis naar Batik & on YouTube see “Dance in a ricecarpet“